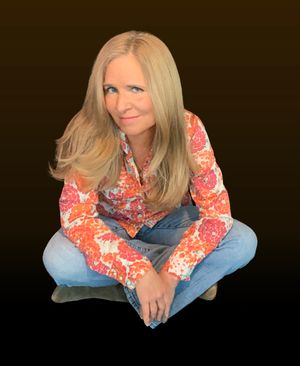 Carla Ulbrich is a comical singer-songwriter who is often compared to Tom Lehrer or Weird Al. She has a love of the absurdities of ordinary life, a somewhat twisted viewpoint, and a way with words. She has performed her clever songs all over the US and parts of England.

Carla's 9 CDs have won her numerous songwriting awards and have been featured on the BBC, Dr. Demento, Sirius XM Comedy Radio, Pandora, and NPR’s Morning Edition. 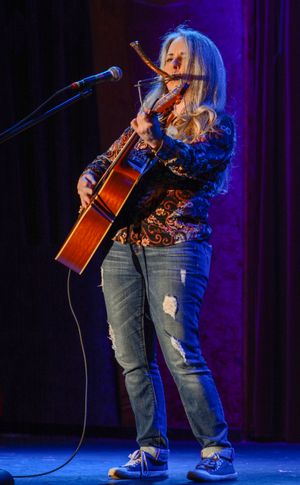 Carla Ulbrich is a comical singer-songwriter and guitarist whose songs cover topics such as Waffle House, Klingons, psycho exes, how rich she would be if she had a copyright on the F Word...

A displaced Southerner, this South Carolinian now resides in New Jersey. Carla's songs have been aired on numerous radio stations, including WSM, the BBC, Dr. Demento, SiriusXM Comedy Radio, NPR's Morning Edition and well over 100 college and community stations around the globe.

Carla is a graduate of Brevard College, where she frequently got in trouble with her music teachers for writing songs while she should have been practicing "real" music. She has taught guitar at Lander University, North Greenville Baptist University, Hummingbird Music Camp and the National Guitar Workshop.

Carla's first CD, “Her Fabulous Debut,” came out in 1999, and was very well-received by fans, reviewers and DJs alike. She has played in venues ranging from the Kerrville Folk Festival to the Bluebird Cafe and has appeared as a musical guest on the TV shows "The Revolution" (ABC), "Homegrown Music" (WVIA TV), "Up All Night with Rhonda" (USA Network) and "The Other Side" (WGN).

In 2002, Carla suffered a catastrophic illness (doing much better now!), resulting in her 3rd CD, "Sick Humor," a collection of humorous parodies about surviving illness- and the US health care system. She is also the author of the book "How Can You NOT Laugh at a Time Like This" (TellMe Press).

"Very talented, very funny, very personable, and an easy act to work with. We would be hard pressed to imagine anyone not enjoying a set... thoughtful and intelligent, sometimes clever observations about life are written in an often wry and humorous manner are placed over very strong melodies and guitar work that is recognized as some of the best in her genre."

"Ulbrich's humor is erudite and charming, similar to a PBS special or an NPR acoustic concert." - Chuck Miller, Goldmine Magazine

"I love playing Carla’s music on my radio show, as well as for my own enjoyment, because she makes me realize that a little laughter goes a long way to curing the malaise that can be instilled in each of us in these difficult times. Her gift for finding humor has helped her recover and deal with {serious} health issues, and she is living proof that laughter IS the best medicine. Her new CD should be kept in close proximity and given a spin whenever you find yourself in need of a smile!" - Ron Olesko, WFDU, SingOut!

"For the most part, as a satirist, Carla chooses to vocalize as someone resembling ... somebody's sharp-tongued Aunt Willa Mae who bakes biscuits to die for, but can spot B.S. in a heartbeat and shred it with a verbal shotgun... Our new social reality presents some real difficulties for singer/songwriters, but we'll need humor more than ever and Carla Ulbrich will be here to provide it." - Richard Cucarro, Acoustic Live!

"I LOVE Carla's songwriting- smart, funny, and insightful. I remember the first time I heard a song of hers on the radio- I was in a car crossing the George Washington Bridge- I asked everybody to shut up because I just HAD to know who that was. Every now and then I thank my lucky stars that I am beyond the age of jealousy. This was one of those times." - Christine Lavin

“Carla is cute as a button, hysterically funny and a phenomenal guitarist, possessing an original and lyrically creative folk repertoire.”

“A really good show. Her material is pretty remarkable. I find it thoughtful, funny, sensitive, kind of out in ‘left field,’-- like I used to find Steve Martin's humor... clever, a talented guitarist, and a stage presence that convinces audiences that the characters she sings about, she really cares about, or she knows something about them... the monologs between tunes really work tying the songs to universal (as well as unique) experiences audiences can identify.”

"... And therein lies Carla's charm: just under the caustic zingers that pepper her lyrics is genuine warmth and even a sense of optimism in spite of everything, delivered with some skillful guitar strumming at a toe-tapping pace. Maybe she's not such an anomaly in the folk world after all."

“She is quite funny. I love her parody songs. She is a hoot!”

"...her humor displays an edge that makes the listener laugh at first but then ruminate afterwards."

“she delivered a stonkingly good performance full of verve, wit and extraordinarily excellent guitar playing. Ulbrich, a name to book even if you can't pronounce it.”

“Very talented, very funny, very personable, and an easy act to work with. We would be hard pressed to imagine anyone not enjoying a set from this young woman ... thoughtful and intelligent, sometimes clever observations about life are written in an often wry and humorous manner. They're placed over very strong melodies and guitar work that is recognized as some of the best in her genre"

“Anything but ordinary. Immensely witty.”

"The wonderful thing about Carla's songs is that many of them portray truth about relationships, living, eating, etc. Fantastic!" - Jon Stein, Hootenanny Cafe, WTBQ

"Perhaps the northeast's funniest interpreter of human foibles has given us another gift. "Aunt Flow Rag" rendered me helpless with laughter... May this review be an unofficial declaration of Carla's status as way above average?" - Richard Cuccaro, Acoustic Live!

"Enter the delightfully twisted musical mind of Carla Ulbrich through her new cd, Totally Average Woman.  Ha!  I detect nothing average about Carla’s high IQ songs.  Her sharp, well-tuned humor inspires a melody of chuckles, guffaws, oh’s, ah’s, aha’s, or oh no’s, and you might hold your belly-laugh until your stomach becomes flat.  The cd is composed of mini story songs.  The listener is actually in attendance of audio musical theater that artfully brings to life the poignant thoughts of the narrator and the lives of unique, yet common, characters."  - Mara Noelle, KVMR-FM

“Carla Ulbrich's gift for turning a phrase is second to none. Her songs make you think, and they bring a smile to your face at the same time; and this South Carolinian doesn't just strum a guitar, she actually plays it. Very well...Think Nanci Griffith meets Ani Difranco -- but with an even keener sense of humor. With tongue planted firmly in cheek, Ulbrich calls this debut CD "Her Fabulous Debut" -- and it doesn't disappoint. Picking favorite song on this disc would be akin to picking a favorite child; these tunes stay with you to an almost to an annoying degree; they are extremely hummable, and you might find yourself banging your head against the shower wall trying to get them out of your brain. Consider yourself warned ... that is, if you're lucky enough to get your hands on a copy of this disc.”

“Ulbrich has her own spunky style and sings beautifully. 'What If Your Girlfriend Was Gone' is a masterpiece.”

"What I liked about this album is that Ulbrich can sing and the music is catchy...

Based on this release I’m going to seek out Ulbrich’s early albums. If they are anything like this one, I’m sure I’m in for a good time." - Steve Ramm, Amazon.com Top 50 Reviewer

“Carla Ulbrich may be the funniest singer/songwriter working right now. This album made me laugh really hard, even on the second and third listens. Often bawdy, always hilarious.” - Festival Radio

"Ulbrich is more than a funny lady though; she is the embodiment of what was once the American Spirit. Despite facing great adversity in the form of major medical problems such as kidney failure and a debilitating stroke in 2002, Ulbrich picked herself up, dusted herself off and got back on her rockin’ horse."

- Will Phoenix - The Examiner

“Carla is AWESOME! She was the highlight of our corporate event, and had our entire staff laughing with tears rolling down our cheeks. She performed for a group of medical professionals, and with her extensive background as a ‘professional’ patient, her hysterical songs and stories fit us perfectly. She's bubbly, outgoing and witty! With an emphatic YES, we would recommend Carla Ulbrich for any occasion.”

“Carla was fantastic. The entire process from booking to event completion was very easy. Carla was prompt, prepared and very entertaining. She managed to work into her act, specific information about us that made the performance much more personal. I would recommend Carla to anybody in need of professional, quality entertainment.”

“What a Treat! Loved it!!!! Useful. Creative and Entertaining Great! Authentic! Perfect! This, Carla, was just wonderful -- so witty, funny, intelligent, thought provoking, heart warming, clever, funny. Extraordinarily incredible timing in her comedy. Just GREAT! I loved this. Carla, you are a poet and a philosopher and a comedienne. What a wonderfully talented woman. She made me laff and cry. A gift to us all. She's a WOW!!! From a "prednisone" colleague, she nailed it!! Great, enjoyed her. Wonderful, I loved Carla's wit and music! Fantastic Recovery! Great voice! Great Ending!”

“Our event wouldn't have been nearly as successful without Carla. In the evaluations, numerous attendees wrote that they wanted Carla to come back again, and how they really wanted us to incorporate more humor into our events. We've also been getting emails saying that they loved hearing her story and the whole event made them feel inspired and empowered.”

“Our patients really loved Carla’s visit to our lupus support group. Not only did she share her story with us , but she brought with her music and laughter. So, not only did our group members feel understood and identified with her story, but they were uplifted at the same time.”

A few venues where Carla has performed:

Association for Applied and Therapeutic Humor